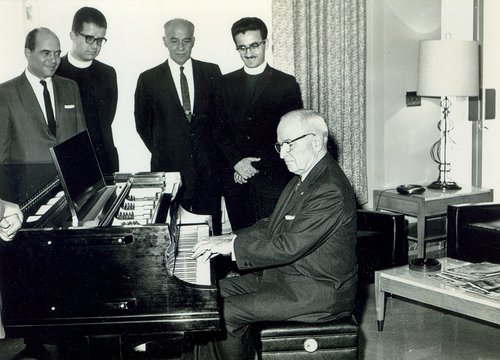 They were the best of times

"The period between 1941 and 1945 was proud and full of enthusiasm. Upon the completion of the new building, the parishioners exceeded themselves in contributions, rivaling one another to see who could donate the most for the paying of the mortgage, which was paid in full in April, 1945, and which included the beautification of the interior."
-Louis Kapnistos

The way we were.

As tragic as it was, the loss of the Broadway church hastened the inescapable decision to relocate rather than to rebuild. With the parish growing rapidly, but with few assets except their faith and determination, they formed a building committee and the search for a new site began. Linwood Boulevard, noted nation-wide for its many beautiful churches, attracted immediate attention, and a site was purchased at Linwood and Flora. Construction began in 1939, and the first service was held there during Easter week in 1941.

Just as the Broadway era keynoted the establishment of the Greek Orthodox Church in Kansas City, the years on Linwood Boulevard were characterized by the rapid growth of the community through its active involvement. World War II saw 111 of its young people enter the military service. Seven were killed in action. The war years recall memories of out-of-town servicemen attending church and being befriended by those who also supported the war effort-through the sale of War Bonds, volunteer work in the Red Cross and fundraising for the Greek War Relief.

It seems like only yesterday ... all vivid memories ... where have all the years gone?

Father Bitas succeeded Father Vasiliades in 1941 and served until 1950. During that time he initiated the traditional and highly competitive Pledge Dinners. He was then succeeded by Father Emmanuel Bouyoucas.

The tumultuous war years ended and once again the community looked to the future. With young people yearning for spiritual guidance, and parents concerned about the perpetuation of the faith, Father Bouyoucas brought to the community the positive influence needed to generate total commitment by young and old alike in church-related programs. His leadership resulted in the establishment of an active and energetic youth program unlike any other in the previous history of the parish.

The Annunciation Herald began as a monthly publication and continues to this day. GOYA was founded in 1951, followed by the Olympians and Olympiads (now the JOY). The Sunday School, Greek School and choir continued to grow. Greek School plays, Greek movies, men's singing groups, sports events of all kinds, Greek dances, dinners and countless other activities filled the church calendar and brought young and old together in a manner never before experienced.

We grew and moved on.

Activities continued to develop through the ensuing years as membership expanded. Under the nine-year pastoral guidance of Father Demetrios Treantafeles, the community flourished with vigor. He devoted endless hours to the Greek School, Sunday School and choir. As a respected and visible spokesman for the parish and the faith, he lectured to many civic and church groups and encouraged them to visit our church.

Father Michael Makredes then followed and served for seven years. He was the guiding force in bringing together the youth of all area Eastern Orthodox parishes. During his tenure, the existing facilities were being taxed to their limit. Several changes ere made in the church hall. However, space limitations, along with escalating neighborhood problems, gradually limited the use of the building for any activities other than services. It was in this climate and through his leadership that Father Makredes initiated the effort to locate another site for the church, and the Wornall Road property was ultimately found and purchased on October 9, 1968.

Five years later, on September 9, 1973, with most of its members no longer living in the immediate area, the church closed its doors and moved to Loretto Academy at 125th and Wornall Road where services were held until completion of the present facilities. Thirty-two years after the opening service in 1941, the Linwood years came to an end, and the parish once again looked forward to a ‘Nea Zoe’ or ‘new beginning’.